Equity markets snapped a two-month losing streak ending October on a strong note. The S&P 500 rose 8.10% for the month and The Dow Jones Industrial Average was up 14.4%, which was its best month since January 1976. The NASDAQ composite was the laggard but still showed a return close to 4%. A strong rebound in October was the result of renewed optimism that the Fed might soften its policy stance and that inflation pressures may start to ease. It would take two days and a 30-minute press conference by Fed Chairman Powell to dash those hopes.

On Wednesday, as expected, the central bank’s policy committee raised its target interest rate by a 0.75 percentage point. It was the sixth increase of 2022 and fourth straight 0.75 percentage-point bump. The move brings the Fed-funds rate target range to 3.75% - 4.00%, which is the highest this rate has been in nearly 15 years. It wasn’t the formal statement from the Fed that spooked the market, but rather Chairman Powell’s comments afterward. He left little doubt about the Fed not softening its stance stating, “It is very premature to be thinking about pausing.”

As long-term investors we avoid paying too much attention to short term moves in the market. However, a daily chart of the market’s performance shows how dependent equities are on the Fed. Markets were flat for most of the day awaiting the Fed statement at 1 PM CT. Following the release of the formal statement, stocks rallied and moved up 1% because the statement itself was benign, maintaining hopes for a potential pause in raising rates. However, once Chairman Powell took to the podium, the mood turned sour with averages staging a near 3-4% decline from their previous highs. 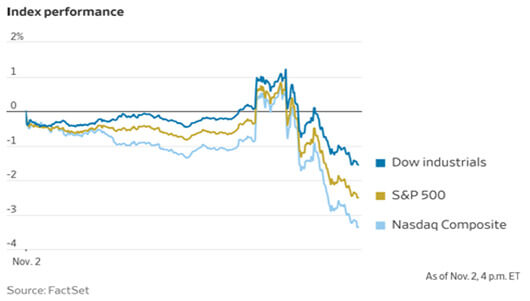 Equity markets were desperate for signs of a Fed pivot, and this did not happen. Unfortunately, I believe the word “pivot” will replace “transitory” as the most used word when talking about Fed moves and inflation. The obsession over when a pivot will occur is unlikely to wane. Employment data, inflation reports, and the leading economic indicators will be closely watched for clues as to the future direction of rate hikes.

With our common goals in mind,
The Harrison Financial Services Team

The opinions expressed are those of Harrison Financial Services as of November 4, 2022 and are subject to change. There is no guarantee that any forecasts made will come to pass. This material does not constitute investment advice and is not intended as an endorsement of any specific investment or security. Please remember that all investments carry some level of risk, including the potential loss of principal invested. Indexes and/or benchmarks are unmanaged and cannot be invested in directly. Returns represent past performance, are not a guarantee of future performance and are not indicative of any specific investment. Diversification and strategic asset allocation do not assure profit or protect against loss.