If anyone is doubting the impact of higher interest rates on the economy, look no further than the housing and auto markets. The demand destruction going on because of higher rates is starting to show up in the data and echoed by CEO comments as well.

If we look at housing, mortgage rates reached levels not seen since the global financial crisis of 2008. As the chart below shows, they have risen sharply this year from just above 3.0% to 6.7%. This is putting pressures on a housing market that was already experiencing some weakness. Existing-home sales have dropped for the past seven months, and the trend is likely to continue with the impact of higher mortgage rates. Auto sales have also fallen sharply over the past few months. Some of this is due to continued supply chain issues but the impact of higher rates is also causing car buyers to rethink purchases. This past week, Carmax (KMX) stock fell 25% on Thursday when their results came in well below expectations showing a decline of 10.3% from a year earlier. As the chart below shows light vehicle sales were steadily moving upward from the post covid lows but have since moved below the average of 14.3 million vehicles annually. 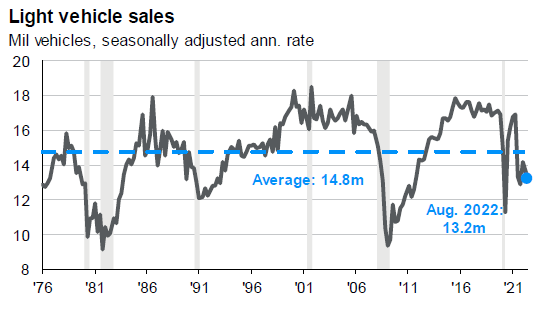 There is little doubt that the five-interest rate increases by the Fed this year, including the unprecedented three consecutive 0.75% increases, are having an impact on the economy. This raises concern that the lagging impact of these rate increases is pointing the economy toward a longer and more pronounced recession than originally forecasted. What the Fed is doing is impacting the demand side of the equation, what is frustrating the Fed, economists, and investors, is that so far this is not having a major dent in fighting inflation.

The opinions expressed are those of Harrison Financial Services as of September 30, 2022 and are subject to change. There is no guarantee that any forecasts made will come to pass. This material does not constitute investment advice. Please remember that all investments carry some level of risk, including the potential loss of principal invested.