“The most important item over time in valuation is obviously interest rates”
Warren Buffett, CNBC interview 2017

To say interest rates are going higher, we first must define what that means. An interest rate is what you pay as a borrower when you borrow money, and what you earn when you are the lender of this money. As investors and consumers, we deal with a multitude of interest rates during our lives - from fixed deposit rates on our bank savings to mortgage rates, student loans, and those stubbornly high credit card rates. Some rates are determined by market forces and others are set by government entities like the FOMC (Federal Open Market Committee ) and businesses, primarily banks. When the Fed changes rates, it adjusts what many view as the risk-free rate. As that rate rises, other rates that derive their value off the risk-free rate rise as well.

Market forces determine the vast majority of interest rates in the public markets. As of August 31, the Fed has raised the fed funds rates three times this year and it currently stands at 2.25%-2.50%. Market forces anticipate a continued path of increased interest rates and that is reflected in short term interest rates rising dramatically in 2022. As the chart below shows, the biggest increase in rates this year have occurred at the 2- and 3-year maturity where interest rates have increased over 3.0%. The bellwether 10-year treasury has increased as well, but the move is minor compared to what we have seen with shorter maturities. 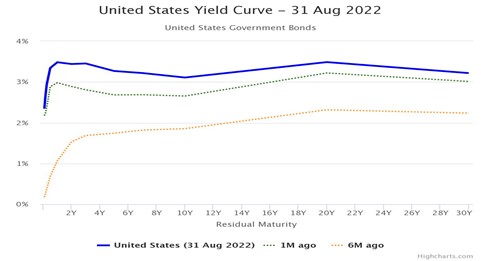 Next, we look at how higher rates impact the economy, bond, and equity markets.

Higher interest rates’ impact on the economy isn’t always immediately felt. When the Fed raises rates, it impacts both the economy and the financial markets. Borrowing becomes more expensive for both individuals and businesses. Historically, it can take at least 12 months for a change in interest rates to have a major economic impact. Evidence can be seen today in the housing and auto markets where slowdowns are just starting to occur, even though the Fed embarked on raising interest rates over six months ago.

What is felt immediately in the economy is the sentiment and psychological shift that the Fed is going down a path of a tighter monetary supply. The signal that higher interest rates are coming has had meaningful impact on the financial markets over the past two years. Therefore, the bond market has adjusted quickly to the belief of further rate increases. Higher interest rates will slow down the economy and that in turn will hopefully bring down the 40 years high in inflation that is happening. Not only does the cost of borrowing for individuals and companies go up but also for the U.S. government. Some estimates are that a 3.5-4.0 ten-year treasury adds more than $500 billion in additional interest rate costs as compared to the 1.8% yield it started with in 2022.

When the Federal Reserve raises the federal funds rate, newly offered government securities—such as Treasury bills and bonds—are often viewed as the safest investments. They will usually experience a corresponding increase in interest rates. In other words, the risk-free rate of return goes up, making these investments more desirable. As the risk-free rate goes up, the total return required for investing in stocks and other investments also increases. Higher yields in the bond market start to compete or look more attractive when compared to stocks and other investments.

Interest rates can theoretically impact stock prices in a few ways. First, it can impact the profits of a business. Companies with debt will experience an increase in borrowing costs which leads to lower profits and cash flows, all else equal. Higher interest rates can also affect stock valuations as fixed-income yields become more attractive. This means stocks require a higher rate of return – and thus a lower valuation – to compete with the now higher-yielding instruments. Higher interest rates mean future discounted valuations are lower, as the discount rate used for future cash flows is higher. This is why there is an inverse relationship usually between price earnings multiples of stocks and interest rates. In the corresponding chart, price earnings (PE) ratios usually decline as the Consumer Price Index (CPI) rises. This is especially evident over the past two years as the gap between the CPI and PE ratios has narrowed. The CPI measures the monthly change in prices paid by U.S. consumers. 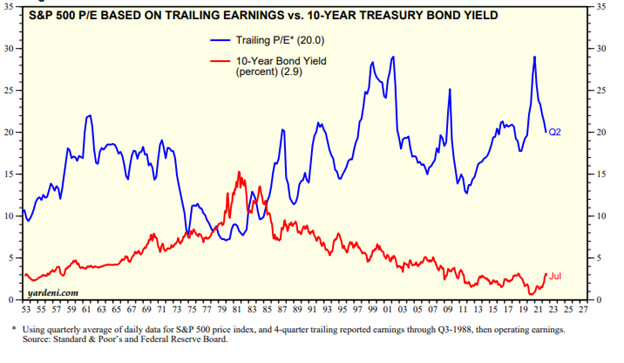 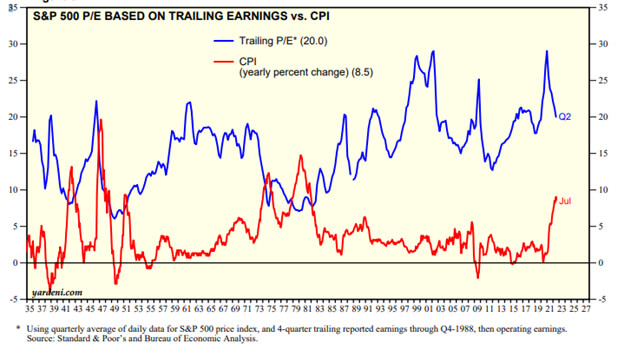 HFS anticipates a multiyear adjustment period of the FOMC raising rates. We also believe that other central banks will begin the unwinding of easy money. This will impact valuation, perceived risk assessment and capital allocation in financial markets for many years. Real assets such as commodities and also value stocks are likely to perform better in this environment.

We started with a quote from Warren Buffett on the importance of interest rates and we close with his quote on just how impactful interest rates can be:

"Interest rates are to asset prices like gravity is to the apple. They power everything in the economic universe."

The opinions expressed are those of Harrison Financial Services as of September 6, 2022 and are subject to change. There is no guarantee that any forecasts made will come to pass. This material does not constitute investment advice and is not intended as an endorsement of any specific investment or security. Please remember that all investments carry some level of risk, including the potential loss of principal invested. Indexes and/or benchmarks are unmanaged and cannot be invested in directly. Returns represent past performance, are not a guarantee of future performance and are not indicative of any specific investment.